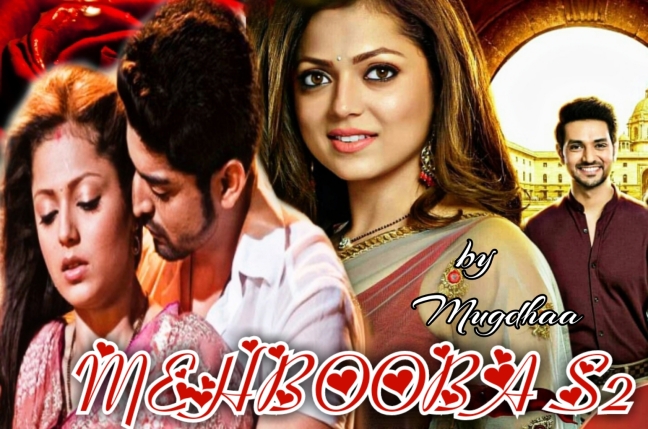 Geet was horrified hearing him, she stiffen for a moment, making Kunal to leave her, as she turned around slowly in his arms, to face his questioning eyes.

I need to freshen up, I am just so tired..she makes small face making him chuckled.

He makes distance giving her space to walk out, before he held her wrist, her heartbeat stopped, what if he again asked her same question,

Hum thik hai, ..she nodded before he leave her hand, did you really forget, I was called to Khurana Mansion for office Work!??

His face told her that he really did, before he come up with explanation she stopped him, it’s okay..you must be really busy at company..it bound to happen.

No Jaan. That couldn’t be excuse for me, I should have keep that in mind,

It’s okay Kunal, I never mind, I thought just to let you know again about my whereabouts to you, ” and get ride of this guilt” she said in mind before turning to walk away.

Why did even she informed him, when the day was over, just to make him guilty..!?? Or just get ride of own guilt..!? But that was even possible.

Even Maan was busy still he cared….but Kunal…!?

Why suddenly her heart wants to make him villain just to make herself right!??

[ A heart is just a heart,
how can you trust it

What can you do if it falls for someone ]

She sank on the cold floor of Washroom, it’s not right, she chanted, rubbing her body as if feeling him, tears well down on her cheeks without her own notice, as memories of their togetherness ran through her mind.

I should stay away from him..and I will..she was determined but still fear lurking at corner of her heart, would she able to hold her emotions with his advances…!??

( I was lost in your memories

I couldn’t sleep in the nights

No one knows the condition of my heart )

When she walked up to bed found him sleeping peacefully unaware about the storm going inside her heart & mind.

How can she expect this from him, when the person in concern never….her heart sadden at the thought again but she let go of her all thoughts & led down beside him.

Facing him and then just watching his face, she tried to sleep but there was so much restlessness and pain in her heart .. just the thought of staying away from him was slitting her heart, giving her hidden wounds,

Plz babaji.. she got up feeling the cozy bed tormenting her , she walked out slowly in the balcony bathing herself in the moonlight.

the cold wind gives her peace while she let the tears rolling down her cheeks again.

His words buzz in her head making her smile, he hate women crying.., but is it okay for him to take pleasure from them..!??

The thought only making her weak, sure..she couldn’t bear him with other women..she wanted to scream out loud..scream out on him but she can’t..and this helpless making her weak and vulnerable.

{ There is peace in restlessness, what to do

What can you do if it falls for someone }

Maan exercised furiously, trying to keep his mind in control. Her face, her beauty..that was untouch.. keep swimming in his mind.

Then, his wiping off her partition, he stopped suddenly in his vigorous moment, she is married, and never before he tried forcing himself on the married woman or in that case, he has not run behind anyone, women themselves come to him for whatever purpose they have.

But with her..why it feels so different, why he always find himself hovering her, whenever he found her in his sight, her innocence, vulnerability and resistance only pulling him closer to her. There was strong attraction building up, even the way she responses to his touches , it only gives him unknown pleasure the pleasure he had never experienced before, even not with those hundredth of girls.

He shall stop before it go beyond, he should stop before he break her innocence and in end breaks her….

The only thought made him determine, whatever the reason might be, he couldn’t see her breaking down .her tears seem hurting him beyond.

Days were passing, and she was fighting with herself to put the distance with maan.

However she left surprised seeing no advances from his side ..he also out it to minimum to call her for work.

Somewhere it started pinching her inside, seeing him talking and working with other female staff but not with her.. he was literally ignoring her.

Why..!? Did he have enough of her physically..in that case.. she was disgusted and fumed herself with the thought.

How she missed his passionate eyes roaming on her every now and then, while small touches, between work hours. Then his devilish smirk….

Her thoughts halted feeling suddenly burning herself in someone’s gaze. She looked up nonchalantly to find it’s him, it’s really him..?? Her heart halted before it started beating manically just with the thought of him admiring her.

{ A heart beats all the time, what to do

What can you do if it falls for someone }

He has tried enough ignoring her, then seeing her sadden face , he didn’t know what to think about it.she should be happy, shouldn’t she? As finally he stopped touching her as per her wish but then why he felt something not right..as if she expecting something else.. there was anger and sadness always on her face.

Today, she looked extraordinary beautiful in that yellow saree , however he tried couldn’t help his eyes admiring her. Seeing her cheeks warming up, it make his insides happy and he found himself walking towards her.

Geet stood rooted on her place, seeing him walking towards her with his passionate gaze on her.

{ Spread on my heart are

She glanced around once to an empty cabin then back to him, her breath stuck in her throat, seeing him suddenly so close. When did he approached her..

You alright!?? His velvety words soothed her aching heart, and in few seconds the aching only increased seeing his care even after those days of ignorance.

Hume kya hona hai, I am perfect fine!! She tried to walk out keeping control on her emotions, not soon she found his strong arms wrapping around her, caging her in his arms,

{ Your arms have embraced my body }

Maan..she gasped then looking at him, his eyes bore into her, pulling her close to him, not soon their lips hover onto each other, touching each other.. both kissed each other simultaneously, the distance both shared only increased desires between both.. making it impossible to part apart..

She held his nape, sticking closer to his body completely, while responded to his vigorous kiss more passionately.

{ I can’t bear the separation

Maan was sweetly surprised with her response, his hands play down on her belly chain, teasing her soft skin, making her moan in the kiss. He held her tightly in his arms as if never to let her go.

He left her mouth reluctantly finding her breathless, seeing her breathing heavily, then adoring her red face, he stroked her chubby cheeks, she couldn’t muster courage to look up in his eyes and bore that passion those eyes behold..

{ Now I want to be with the shadow of your eyes

I want to chant your name at dawn and dusk}

Then feeling his face burying in her neck, Maan.. she moaned groggily, holding his coat in a fist while he shower soft kisses on her neck, going down on her cleavage.

You look beautiful today!! He whispered huskily rubbing her swell of curves, her skin deepen in the shade of pink, first with his touch then hearing his words, it swell her heart with happiness.

She gasped hearing his praises of words, is she dreaming or hallucinating, she looked up into his eyes to find the truth..it’s reality.

He tuck her tendrils of hairs behind ears, cupping her jaw, she closed her eyes feeling his lips rubbing there.

Then moving down he rubbed them on her delicate cheek, suddenly he grasp her close, his hardness poking below her, she gasped before he could move further, there was a knock on the cabin door making both pull apart.

Do like & comment, next gonna pwd protected.. so make sure you do that..  do plz write your usernames from forum on blog while you comment.,so that i know to whom pm pwds.