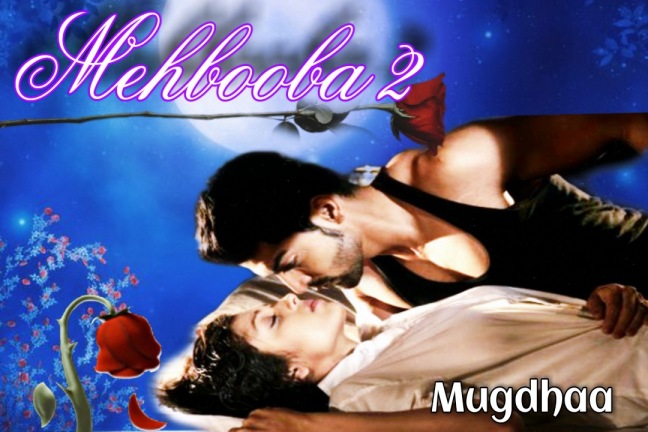 Geet became silent, as she do not know what to answer him, she looked here and there to find any suitable words…but she couldn’t…

Maan was having hard time to control his laughter seeing her making faces, he finally let out a chuckle, shaking his head.

She irritated turned on her heels walking away from him, he rushed forward, held her wrist, Geet… achcha tell me, you do painting also…? Yeh shauk kabse laga tumhe…he distracted her cleverly.

Bachpan se…She turned briskly in his arms, putting back the Canvas properly.

You know…I enjoyed the most at the drawing period at school…she began excitedly, Maan just adored her innocence.

My teacher was such an expert in drawing, I was big fan of him…she clapped jumping in joy.

Maan stops, his ear became alert, as Aarav’s words about his daughter’s crush rang in his mind.

Suddenly he was jealous…next moment he grabbed her in his arms, making her startle, “bas… I didn’t ask about your favorite teacher…, I simply asked you about your hobby.

She twisted her lips, Wahi toh main bata Rahi hoon Na…but you don’t want to listen to me…she complained struggling in his arms.

Achcha sunao….he sighed, as he thought it’s right time to make her open her every secret.

He lifts her in his arms walking towards the bed, He sat down on the bed, holding her close in his lap. She blushed but soon was telling him her childhood stories…from school.

Maan listened with patience and could see her face glowing, eyes shining like never before, as if she found the lost treasure.

Enough!! Kitna bolti ho tum…he suddenly jerked her closer, touching her pink petals with his fingertips making her stop, she blushed and bite her tongue, broke into giggle….

Did you had lunch?” Maan.

He immediately got up, taking her in his arms,” tumhe apni sehat ka bilkul khayal nahi…” he sweetly scolded her descending the staircase to reach kitchen.

Aap ho na humari fikar karne ke liye, ” she said in her mind, looking at his concerned face, when Maan looked down at her, she simply put her head on his shoulder, getting cozy by hiding her face in the crook of his neck.

Maan groaned in pleasure, as he jerked her closer, almost rubbing her curves to his broad chest. It was nice carrying her, her arms circling his neck, with his right arm around her so that his hand lay gently upon one breast. She didn’t object and once in a while he moved his fingers, feeling the fullness that was under his hand. Those pink lips of hers were only inches away from his mouth.

He kissed her again holding her close to his heart, as if to ease his arousal.

He led her to a chair as soon as she out the last item in the table and pulled her down on to his lap, his hands caressing, seeming not to mind at all where they are moving…

He left his arm beneath her breasts, his hand gently caressing her ribs, his thumb nudging the swell of her left breast…he was pleasantly surprised to find it bare just under her silky gown.

Geet lost her senses with his sinful touches,

Maan…plz…she whispered pushing his hands down,

As soon as she pulled the lid down from the bowl, he stopped and looked at the items, she uncovered each…and filled his plate first then moved to take another plate when he stopped her.

She was first confused, then her eyes widen in realization of his words, red hue spread on her cheeks,

He took the spoonful of pasta offering her, “You cooked everything of my choice?

She took it not wanted to disappoint him with lower eyes, just nodded in response to his question… while chewing the bite…she watched him eating from same spoon.

He continued to admiring her all the while having his delicious lunch with her in his arms, she think so much about him…it was pure bliss…he never knew the feeling will so beautiful…as he leaned over…again began his teasing…her hand covering his to stop his from its wandering. His fingers entwined with hers and he left both hands there, his thumb still moving against the gentle swell of her breast.

Geet couldn’t concentrate on the food now as her whole being was caught up in the feel of maan against her.

His chest was hard, offering great warmth & support to her. Through his shirt, she could feel the steady beat of his heart.

She tried to move his hand away, but he wouldn’t let her.

‘Jaan…what happened?” he asked softly in her ear, his breath warm against her skin.

Geet sank against him, closing her eyes. The tingling warmth his thumb caused was making her dizzy. She brought her other hand to his and tugged at his… He had to stop or he would drive her crazy.

Let me finish with this…plz, she pouted showing him the plate.

He smirked and nodded, before feeling her.

Geet was so overwhelmed to see her dream coming true in that way, she has always been fantasies about him feeding her with all the love pouting out his eyes.

And now when it is happening she couldn’t help but laughed at the irony of her fate. She doesn’t have right anymore…

It was wonderful to fantasies about how things would, be if they were different. She had visualize herself held in his arms often, snuggled together while they talked about whole days adventures…or just anything.

She would definitely remember this day forever.

Lying in Maan’s arms, he feeding her affectionately…it was a moment in time to be captured and treasured.

After lunch, he gave her prescribed medicines according to her timetable.

She took it with a smile.

“How is your stitches now, do you feel any pain?”

Maan wasn’t yet convinced, he just hmm unsure to leave her

Maan you can go to office, I am really fine..Kunal bhi bas…

But her words were stopped by Maan, who put his forefinger on her lips to shut her. She looked into his eyes confused, to see anger in them. She didn’t get that was because of his jealousy..

He felt, he couldn’t tolerate more, seeing her with someone else…hearing his name from her lovely mouth.

Kya baat hai…you looked tense. She cupped his face…smoothing away the hard lines from around his mouth with a gentle finger.

She watched as he lean back to the wall with a sigh…He reached up and caught her wrist, gently pulling her in his arms,

I need to confirm, can I just….his hands already moving on her back, it took her a moment to realized what was he really asking..

Geet hesitated only a moment…but stood still him his arms, with her head bow down. He got her silence answer, and slowly pulled down the zip of her gown.

Maan really wanted to confirmed himself about her health, he was really tense, he couldn’t keep in peace, unless he saw her wound completely heal.

He drew her against him, his hands on her back, his arms strong, molding her against his body, Geet could scarcely breathe. Her heart pounded, and the blood raced through her veins, throbbed in her ears.

He slowly switched their position, pushing her against the wall, she closed her eyes, feeling him pushing down the gown from her shoulder from both sides. It slipped off her shoulders, falling in to her waist. She clutched it on her breast.

Maan looked at the little scar in pain, and bend to put the feathery kiss on the wound. She shuddered like a dried leaf, making his desires awakened again.

His hand trailed slowly on the scar, from her back, his fingers tormenting her, her hold at her chest got loose and his fingers found the opportunity to come around her side to cup the full breast his thumb teasing the rosy tip.

Geet moaned softly, melting at his touch. She encircled his neck, her hands entangling themselves in the thick hair at the base of his nape, as she arched closer to him, giving herself up to his embrace.

His mouth move to trail kisses to her ear, nibbling the lobe gently. Geet felt her strength flow away as if burned up by his touch.  She wanted to stay with him, to never have him stop his assault.

His kisses trailed down her throat, softly against the pulse at its base. His tongue licked her skin, and bringing fresh fire to her.

maan turned her around briskly and then, suddenly, her breasts were free. They were ripe and swollen, the nipples hard and red. She swallowed a couple of times, her face flushed. He moved closer to her and put his hand on her throat, warm and smooth, then drew his palm slowly down over her body. She stood very still, her eyes shut, her lips scarcely moving. He caught her in his arms, drawing her close, and both kissed, their bodies pressed tightly together.

The heat from his mouth seared her whole being, awakening her to hungers and cravings she’d never known before. She returned his kiss, her tongue meeting his, caressing his, responding to his. Her fingers smoothed the cotton shirt he wore, feeling his muscles bunch and release beneath.

after a while he pulled back, staring down at her, his eyes glittering with his newly discovered feelings, Geet was breathing hard, as if she’d run a long race, her pulse tripping at twice its normal rate. She was afraid she’d sink down to the floor; her trembling legs wouldn’t hold her for much longer.

Maan lifted her before taking her towards the bed, she was staring at him with no senses, He looked at her and she wondered what he saw. She was burning up. She tried to lower her eyes …feared of getting caught by him. Did he see desire raging in her eyes? Did he see the yearning she felt for him?

She couldn’t resist but looked up again and his gaze locked hers, would not release her as he sat down on the bed, holding her close in his lap. His fingers rambled down her legs and flicked off her slippers. Then they wandered back up to her knees. She shivered uncontrollably, squeezing her eyes tight…crossing her arms over her breasts. His hands moved hers away.

A thrill of excitement quivered in her, and her arms went round him, the heat of his body through his thin shirt making her dizzy with the burning passion.

I Love You, Maan said in the flow of his emotion, he couldn’t hold back. His mouth moving down to her shoulder…while his hands moving against her skin, his eyes gazing deeply into hers. Geet was lost in his kisses and touches failed to hear him… she just was moaning his name out of ecstasy.

He felt her trembling against him and he paused, His hand stopped its caress of her breast, only holding it gently and he cupped her face before confessing again,

Her heartbeats quickened when Maan looked warmly at her. She tried to avoid his look, knew her face was flushed.

`What are you talking about.. Maan,’ she said shakily. Maan in one jerk pushed her down before hovering on her…he pressed the length of his body against hers. She felt his need for her, felt that same need in her for him, and was trembling from the emotion of it.

thank s for your support guys… your comments make my day.. so never stop giving your reviews on each update…