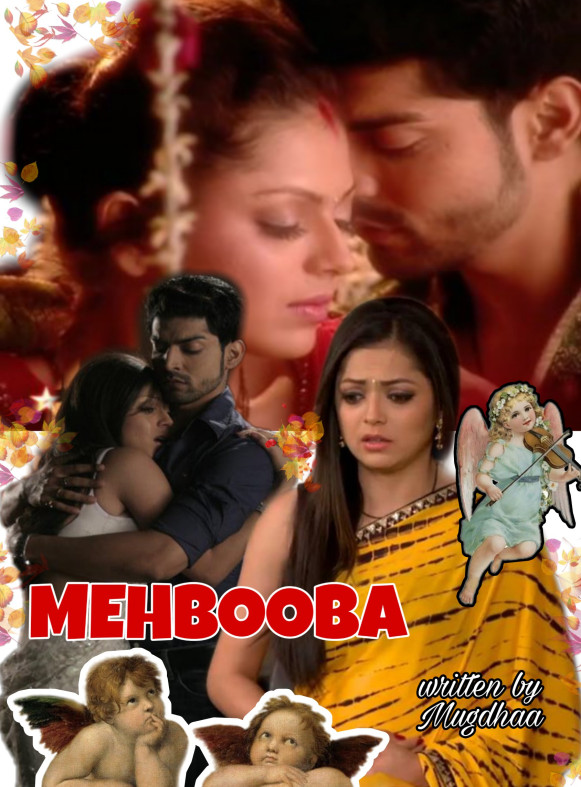 Ps. Before you start reading, let me guys remind you about the new villain and character of story, it’s Rajveer, he is the same guy who has demanded to see her face once in the holi party held in the Jodhpur palace , at Samrat place.

Check this update, I guess most of readers forgot this.

Geet was getting so much scared, her heartbeats increasing as the minutes passed, so as Guru also was restless, thinking of the ways to rescue her.

she held his arm, and he hugged her, don’t be scare, I have promised you and will fulfill that anyway.he assured her rubbing her back.

Guru jerked her apart to face her, don’t talk rubbish, he glared at her, wiping her tears harshly, think about angel atleast, he has come to know about baby’s name from her, as they had talked day and night about baby and her future.

Just when they was about to move out, both heard the footstep, guru briskly pulled her being the wall, hiding her protectively in his arms, shh..aawaz nahi karna.

Geet nodded against his chest which made him smile, he concentrate again on the voices,

Geetanjali!!! He roared furiously, better you come out yourself to me, aur you never know what happens to your Aashiq. He laughed evilly scaring the hell out of her, as she clutched his best tight, looking at him fearfully.

He nodded in no assuring her, we will move out somehow from here, don’t get into his words, he won’t be able to do anything…

His words halted as next he felt sharp pain cursing through his head, then body, as he yelped in pain follow by Geet, who shouted in horror, guru..

As his men held from either sides, she wriggle in their clutches crying for him, kyon maara use, Rajveer!! She roared furiously,

Leave her!! He ordered his goons who left her next moment seeing his angry eyes, don’t you know unhe chune ka haq sirf hume hai..

Geet was disgusted, she rushed to guru,crying for him, as he led unconscious, blood dripping from his head, inhe hospital le jane ki jarurat hai, she cried, guru..she patted his cheek but he didn’t open his eyes.

Jarur Rani ji..he laughed manically bringing her back the old memories of palace and her life, tum..?? She looked at him confused, trying to think where she had seen him and how do he know her.

I am shocked raniji, aap hume itna jaldi bhul Gaye, he pretended and then turned serious, but I can’t forget the humiliation I have to faced because of you,

Her eyes widen hearing the name,

Geet gasped, taking step back as she saw him approaching, the memories of the night came flashing before her, she had already felt uncomfortable hearing his demand that night, and Samrat had saved her somehow.

But now, no one can stop me from touching you or even claiming you.. you are here before me, alone..he smirked caressing her cheek with his forefinger.

Geet jerked back, you are disgusting, stay away from me.she pointed finger at him.

He held her hand, abhi toh aapne kuch nahi dekha hai, let me show you darling, how disgusting I am..saying so he jerked her in his arms, trying to seal her lips.

Leave..me .she tried to push him him away, ahhh..her belly ached, as she put on hand on her tummy, and getting whole lot of courage thinking about her angel she pushed him away throwing him apart to stumble upon her feet.

Samrat has done the needful, jo ek Raja ki karna chahiye, he saved his wife’s pride, and you did wrong..and now what you are doing is a sin.she darted furious glares to him, turning back to rushed to guru to awake him.

But he grasp her wrist, making her jerked around, she yelped in pain ..chodiye Hume,

He clutched her hairs harshly, don’t you dare to pull that stunt again or you never know when you will lose your baby..he hissed..

Next moment, she slapped across his face, how dare you.. she held her tummy protectively, as it was aching badly now, but she was lost fighting for her dignity,

Guru..plz wake up..she was screaming looking back at unconscious him.

Hume Jane dijiye..she struggle as he again bend forward to kiss her, she closed her eyes, feeling her energy giving up, when all of a sudden she felt freed herself.

Opening her eyes she saw him standing in between her and that devil, like a shield protecting her,

She smiled in tears, and hugged him from behind..

How dare to to put your dirty hands on her, he clutched his neck harshly, strangling him.

When Geet saw his goons waling around them and going to attack him, she screamed out his name before they approached.

He dodge everyone, punching few, and grasp her wrist pulling her out of the place.

Geet couldn’t ran, but they were walking fast, hiding in between behind the bushes..as it was night, no one can see much..

Hum aur nahi chal sakte, she rolled down holding her tummy a it was aching badly.

Geet,aankhe kholo..plz ..he parted her cheek, she was feeling dizzy, bas humare angel Ko bacha Lena…she pleaded with tears rolling down her cheeks,

he was determined as he kiss her softly making her astonished, but she was losing her energy, will to live her life facing so much.

He pulled her against his chest , he was also in pain, his head throbbing badly and was dizzy but he couldn’t leave her.

He needs to keep her safe till she reach her Maan.

Geet…Maan called out madly as Abheejit and his team tackled the goons, Rajveer in his Custody,

Where is my Geet, he clutched his collar angrily, jerking him up..

Rajveer only smirked, don’t you know MK, that Aashiq of your wife, take her away, bhag gaya woh use leke..he laughed out manically,

Who .speak up, he shook him angrily, he was burning like a lava,

He must be taking about guru, Maan!! Abhijeet reolied to which Rajveer smirked again evilly.

Why don’t you guys find yourself, because the guy betrayed me also, r**** for that woman he betrayed me..he was raging madly cursing guru.

Maan punch him again, hitting him badly, you dare to touch her with this dirty hands, he threw him on the floor, pinning his wrist believe his shoes harshly,

He yelped in pain, struggling to be free from his clutches.

Pata kaha hai woh, Maan kicked his stomach harshly, till he puck out the blood,

Let’s move fast from here, in case we missed them.

Maan gulped his all pain and nodded, knowing he need to keep strong until he found her safe and sound in his arms.

But her heartbeat stopped hearing her name being calling by him as he again continued to call her in a hope to get response,

She knees its him, it’s her Maan’s voice.

Maan..she cried out, as her stomach ached, she felt it’s time for her baby to come out.

Jaan.. I am coming.. he shouted searching her in the darkness

Maaann..she screamed out in pain, wanted to hold in his arms.

Geet..geet.. all heard gurus scream and follow the voice.

Jaan..he gasped seeing her bathing in blood and sight was not so pleasant, one lady officer covered her With her coat, sir, we need to rushed her to hospital immediately.

Maan took her in his arms without any delay, and rushed towards his car, which was little distance away.

Jaan..keep your eyes open, nothing will happen, hearing Maan’s soothing voice after a long, make her relax, still the pain was unbearable..

He was teary as well, seeing her condition, yes, I am here now, and I won’t let anything happen to you as well as angel.

Geet smiled, unhone bhi yahi kaha tha..she pointed behind him, as he looked at his back only to see his look alike named guru being dragged away by team of officers.

He looked back at her only to see her in unconscious state in his arms.