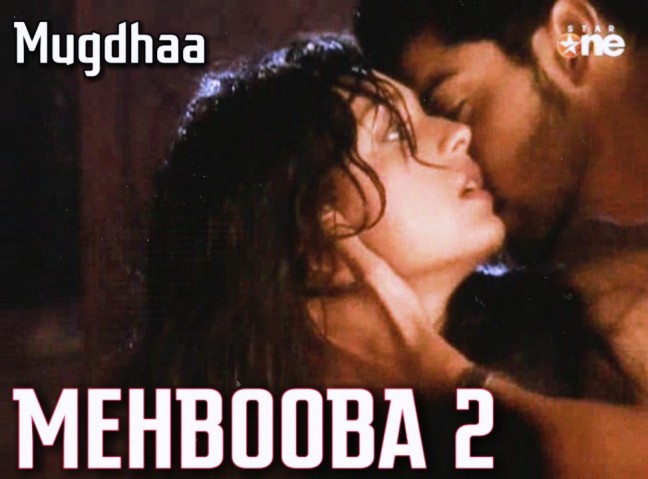 Geet washed herself, taking care of her saree not get wet but when she was about to walk out, her hand accidentally hit the knob of shower, turning it on.

Maan walked inside, only to hear her small scream, he rushed inside worried for her but reaching there his steps halted, seeing the wet mermaid drenching in the shower, Geet was trying hard to turn it off but the knob was so tight for fragile her, since room wasn’t much in use recently, it was jammed.

Maan chuckled, walking behind her, his hands snake on her, reaching the knob and Geet looked behind , pulling herself out, she watched him ” how easily he turn it off” she pouted, crushing her pallu in palm, peeling of whole water.

Maan himself got drench in whole but he never mind getting wet with her, as he turned to watched her, his breath stuck in the throat .

She was unaware about someone feasting upon her with just eyes, as she took her silky wet hairs at side, to peel off water from them.

He kept gaping her shamelessly, her body structure visible through wet cloths which sticking to her, her pallu was in her hand, while he saw her wet blouse showing her taut nipples, without knowing his steps took him near her,

Geet came back to her senses feeling his hot breath on her face, when she looked up she was startled finding him standing so close, next he grasped her waist pulling her closer.

You loved to pulled yourself in trouble, Disaster Queen!? He teased in his husky voice, nuzzling her wet nape..

Geet shuddered in his arms, first she was feeling cold & then his touches making her crazy.

Humne kuch janbuz ke nahi kiya.. I was just coming out and it hit…..

He silent her by putting his lips on hers, her eyes widen as she gaped him.

No need to explain anything to me, Geet! He whispered on her lips, rubbing his lips sensuously on her, the kiss began with his teeth nipping her soft petals, he suck her mouth hungrily, while his hands began their work on her wet sensuous body.

Geet gasped with his hands pressing her waist, taking the chance he slipped his tongue in her mouth deepening the kiss. She was hypothesized by his passionate kiss, as he pinned her on the wet wall without her notice, and his hands cupped her breast on her blouse, pressing it, feeling it’s softness.

She was moaning in his mouth, aching for something forbidden she never knew, her soft palms crushed his shirt in a fist, she was trying to grab him close, that only ignite his passion and he left her mouth, showering hungry kisses on her jaw, going below on her throat, neck, reaching her half open cleavage he bit her hard, he opened her hooks which were at front, watching the magnificent sight of his life.

If they were looking so gorgeous hidden behind her small lacy b”* then he was eager to watch her b***** bare..

Oh…Maannn.. she moaned feeling his mouth doing magic on her bosom, he buried his face in her bosom and smooch her soft skin, biting it in middle.

He was about to snap open her hooks when she sneezed suddenly halting his movements.

He realized she needed to dry herself or else she would be sick.

Aacchhu.. she again sneezed, rubbing her face on his chest, hiding herself in his arms, fetching warmth.

Maan smirked and lift her shivering body in his arms, that’s when she realized her condition.

She tried to hide herself from his eyes, then finding nothing to hide, she buried herself in his chest, hugging him tight.

He groaned feeling her soft mounts crushing on his chest, through their wet cloths. He let her down softly once they were out of washroom.

If you can let go of me, I will fetch you towel to dry!! He teasingly said feeling his face in her neck, making her shiver, she clutched him as a reflex, then as his words sank into, she quick let go of him, standing in the middle of room, with arms crossing on her chest.

Maan sighed seeing her gesture, no woman before had shows this tendency in his life before, they would lay before his eyes nude shamelessly , even in day lights. Thinking so, he closed the curtains of room, and fetch two sets of towel from the cupboard.

Here, dry yourself first.. he offers her, she almost snatch that from his hands and turned around facing her back to him.

Maan pulled out his wet shirt, looking at her continuously, as he dried himself , his brows raised up seeing her shaking, it took him to time to realized, she was actually crying.

Geet…he put his palm on her shoulder, really worried for her,

Plz..she shake it off, still sobbing , cursing herself silently for sticking in those situations.

Humara kuch nahi ho sakta..na hum khudka khayal rakh sakte hai…na hi musibatose picha chudwa sakte hai.. Kunal was really saying right.. .. she was murmuring in between her sobs. It was audible enough to be gear by him, he was really unaware of how should he react , shall he laugh out loud hearing her cute complaints about herself or feel bad seeing her cursing own self.

His words ” disaster queen” still tang in her ear, and then if she wouldn’t have called trouble for herself then further things would have never happen..

Their thoughts halted with the loud knock on the close door, that’s when she notice the door was locked, she stood numb not knowing what to do.

Ji..ji.. Dadima.. words slipped from her mouth as a reflex, she compose herself giving him fearful looks.

What taking you so long, dear. Is everything fine.. open the door.

Geet gasped, her eyes widening, both looked at each other thinking something, then Maan gestured her to open the door as he slide beside the door.

Geet hesitated open the door a little , only peeking through ajar door, Dadima, oh..actually..her breath stuck, feeling his hands going on her waist, then belly, he pinch her..

OMG, beta.. how this happened? Have you dried yourself..

Wahi rukiye…I will bring Annie’s dress for you..

No.. Dadi.. she instantly stopped her, scared from Annie’s anger, seeing her attitude downstairs.

Dadi stopped and looked at her, you can’t remain in wet cloths dear..

Why not, she chuckled seeing her small face, Abhi late hai..you stay inside..

Geet sighed and locked the door, only to come face to face with devil inside, who was having huge smirk on his face, you looking hot in this, why need to change..!??

Geet was tongue tied hearing his remark as he grabbed her close, his hands removing her blouse,

Chodiye Hume..she slapped his hand off from her cloths, and pushed him but he didn’t let her go, keeping his stern face on that scared her, she stop her wriggle and looked at him.

Plz..Hume jaane dijiye.. she softly said, and next moment he let go of her, she instantly turn around rushed to walk away, but her feet stuck in the wet saree which has became mess, she gasped ready for the fall which never happened as he pulled her in his arms, her chest was heaving up and down, for being breathless while she hugged him tight out of fear.

Maan… She pressed his bare back, feeling wet down again with his acts.

Maan was arouse like never before, no women had made his condition like this before, he have never wanted someone this crazily like he wants her now. He never know what black magic she holds that he find himself only behind her, women are behind him like crazy, just have one night stand with him but he wanted once to touch her deeply, make her his, f*** her till she wouldn’t take it..

Their raw passion halted with a knock on the door, Maan pulled apart, cupping her cheek, open the door.. she was still dizzy, just nodded and open the door keeping ajar, thank you, Dadima. She took silk material of saree from her hands with blouse inside it..

She shut the door, and faced him again, this time she noticed his bare torso, and her throat became dry seeing it’s perfect structure.. then next moment she turned her eyes away feeling ashamed.

I can’t go out, since anyone can see me..

Ji..!?? She was terrified hearing him,

I will turned my back , you change here.

Seeing her not making a move, trust me, Geet.. he urged already turning to his back.

She looked back at him, then sighing open the hooks of her undergarment..

Maan heard & sense her every move, his eyes were close and fist tightened to control himself.

Geet rushed downstairs wrapping her sare pallu around her shoulder , she clutched its end on her waist.

After sometime, Maan walked down wearing blue shirt & jeans. He looked gorgeous that what Geet thought glancing at stairs from where he was descending slowly.

As their gazes met, all things that happened inside close room follow in their mind, making her blushed scarlet and she averted her gaze making him smirk.

Let’s go… He said softly reaching near her.

Where? Her question was instant that make him raised his brows.

Where do you think we shall go now!?? Date?? Ya phir Kahi ghumne jaana chahti ho apne boss ke saath..!??

He was such a teased, but very irritating for her..she fumed like never before twisting her lips, turning her face away, muttering few curses under her breath.

I think, you had called for urgent office work!! She managed to reply back looking at him.

So that where I am taking you, do you think I have open office in my house.. or do you think we can work just with one or two files.

Now that should by known by him, Hume thode hi pata hoga.. she muttered to herself , really upset with his constant taunting.

Did you say something, !?! He raised his brow.

You should talk aloud not muttered to yourself.. he said walking away followed by pouting Geet.