Maan was so lost in her ,when she suddenly pulled out from his arms realizing just what she was doing. Still she was filled with her own sweat.

AAP yaha kya kare rahe hai ?? She asked herself lost in his aroma, she tried to steady her heartbeats . Tried to remember just what she was doing here in kitchen and then suddenly flies out from it leaving him hurt with her attitude. 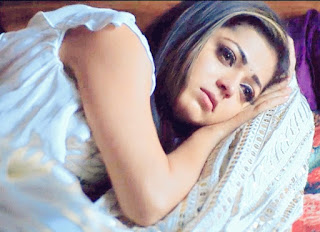 Geet couldn’t sleep after what happened, his closeness stir  those emotions again inside her , she wanted to be in his arms right now that she sat up at instant to go to him.

But then her feet stop , getting all flashes , just what had happened in the past.

She was fool that time , she was at fault not Samrat ,her eyes went towards him.yes he did cheat her but what she did , she too did the same . 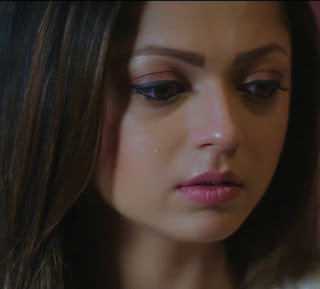 Not now. She would not fall for his charm yet again. She would not melt this time like past , so that he would again broke her and this time she can’t risk it. Her baby is her responsibility now .her hands wrap around her stomach protectively.

If she will break down then who will take care of her baby.what will happen to him . She can’t trust him now .

And she went to sleep again with heavy heart . Her heart scream out to her to go back to him , gave him just one chance , he will not betrayed her .

But her fears was so deep had made a place in her heart that what if he will again leave her, what if he is just back again for his lust.

She can’t risk her baby’s life now because of her .

No..don’t… Leave him…it’s mine.. don’t take him away .. she shouted furiously crying bitterly and suddenly his face flash in front of him. .

and she woke up again in her own sweat beads , tears flew out of her eyes furiously, she cried bitterly. 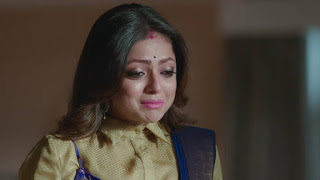 Maan who was seating beside her on her bed got worried seeing her condition .

He tried to touch her , but she was so frighten that cradle back furiously getting hyper.

No.. don’t.. it’s mine..yeh humara hai . She murmured rapidly cuddling herself together.

Maan was shock again with her behavior , he was again left hurt seeing her scare from him.

sweetheart , he again tried but she snap his hand furiously .

Hume chod…iye… She shiver in his arms and Maan left her seeing her condition just then Samrat entered inside the room .and seeing the scene his blood boiled to no extent knowing the reason well .

He ran towards the bed seeing her condition and Geet at instant hug him .

He was just about to reach her when Samrat this time show him his palm. 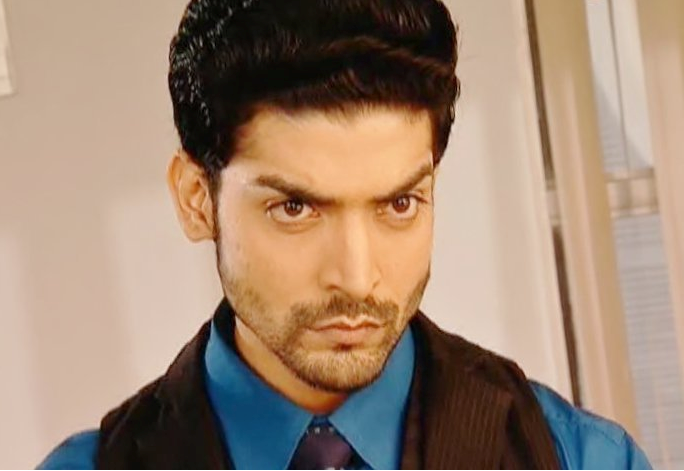 Maan glare him furiously, he was loosing his patience now.

Don’t make it more complicated for us nor for her .Samrat retorted when Geet suddenly blank out .

Geetanjali ! He patted her cheek few times and Maan rushed forward beside her.

What happened to her ? He asked worried seeing her like this split his heart in pain , he regret his each doing in past.

Samrat wrap her inside blanket patting her head . 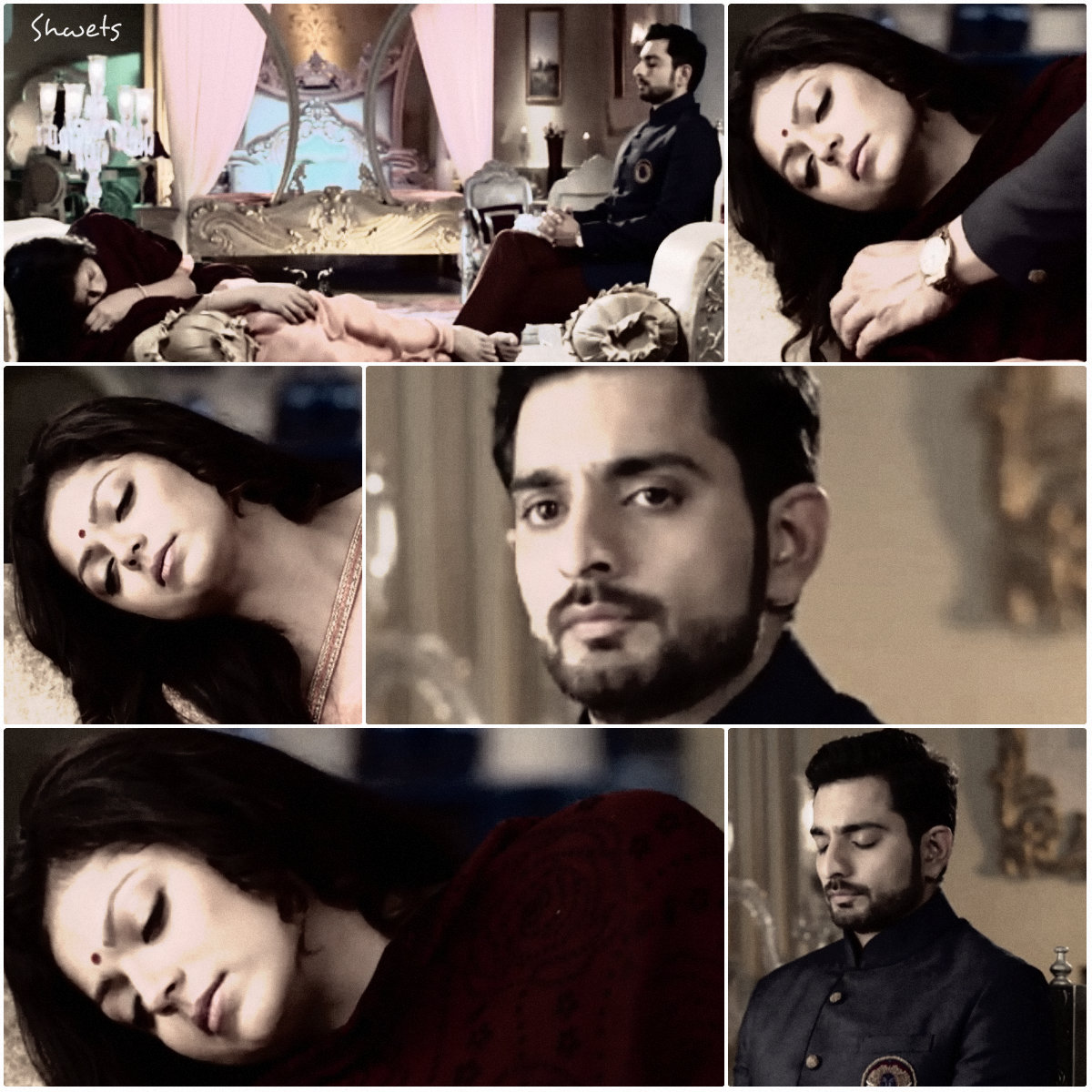 I have to tell you something , come with me , Samrat got up from the bed and Maan followed him behind .

Both went towards back yard of the palace.

Maan was confused, anxious at what he was going tell him. His heart was beating rapidly restless with the thought.

Samrat was clueless that from where to start and he took a deep breath before starting.

You know it right Mr.Khurana ,she was not happy with me. He started and looked behind at Maan who’s face was looked straight giving no hint of emotions but he knew once he will know everything he will be most happy man .

After he was finished telling him the truth of there life he found himself still around that corner of the past where he had first saw her . 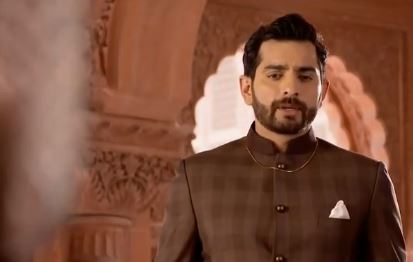 I did snatch that beautiful smile from her face. Samrat said lost in the memories .

She looked beautiful, you know ,he looked at Maan to see him fuming offcourse for his lady love that what he expected from him at the end knowing about there past.

She was liked a free bird whom I caged in this golden cage.he spread his arms to show him. Maan was in extreme rage , his eyes were blood shot red knowing what she had to go trough all this while. 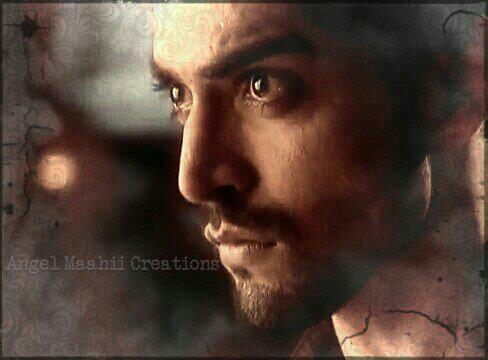 How dare you ?? He mutter furiously glaring at him , his fist tighten to punch him right on his face.

i regret it now. i regret, samrat repeated to himself more feeling guilty for his own deeds .

but You didn’t either tried to find out yourself, and you claim to loved her .Samrat scoff furiously leaving Maan to think on his words. Yes he said right indeed , if he did have before then this situation have not arises today.

That kundali dosh kept me away from her .Samrat continue still thinking on this ,

You still believe on this things. Maan narrow his brows together asking him for he couldn’t believe this things.

Keep that aside. I never believe this things .Maan give him taunt.

Samrat left a deep sigh still clueless with the whole thing. He was not sure if he could believe it or not.

You have to tell me yet , what happened to her. Why she was behaving this way aur woh Baar baar behosh kyoun ho jati hai.

His question made samrat quite for a moment .

I can’t tell you that for the words I have given to her.

Tell me it’s not that serious .Maan was going worried sick for her and why she don’t want anyone to know it .

It is and it is not . Samrat smirk again for the happiness that going to come .

What..spit it out . Maan speak furiously.

No. I can’t . Or else your sweetheart would never forgive me. He added smiling at him.

Maan was totally at peace hearing him.

So you agree to divorce her finally. Maan asked feeling satisfied today to get her back

No I am not still , when did I told you. Samrat reply back himself amused .

Because I can’t still trust you with her.

His words made Maan fume rapidly .

I don’t care what you thought about me , only thing matter to me is she , what she think about me.maan back fire turning furious now.

So do she . Samrat thought to play along , though what he said is indeed was true.

What do you mean.?

She do not trust you , Khurana ! He walked around him .

Maan looked at him feeling deep hurt just as the words spit out from him.he gulp his emotions keeping his straight face.

You have to win her back , her love , your love but the most important thing is here , her trust.

He put his hand on his shoulder and press it looking straight into his eyes.

And keep your attitude and anger aside to get her back. He added

Maan clinch his fist not liking his words.

You did have hurt her enough, Khurana .Samrat now turn serious turning his back at him.

You have pushed her once , now beware ,she is not ready to trust you yet again in fear that you may push her again that she will not able to bear it yet again . He turn soft and looked behind at him.

I can never , I really do loved her, it took me time to realized my feelings for which was always there from the beginning , I first time met her., his eyes moisten hearing him , getting to know those new facts.

Samrat looked at him amused finding himself about that first night. Yes he did saw that spark between them but thought to ignore that time since it was not his matter, he was only  feeling protective for Geet. 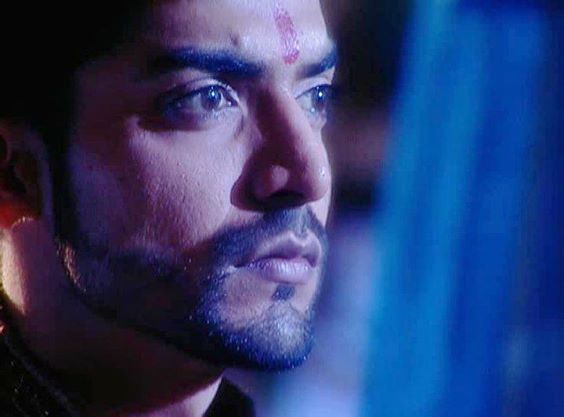 I did a mistake once ,if only she could give me chance , I would never leave her , she is my life.

This is what , you have to make her believe.

Make her believe that you will never leave her again , you do love her, prove your love man .Samrat spoke giving him straight.

Yes I will win her back .Determine Maan walk away from there leaving Samrat there. 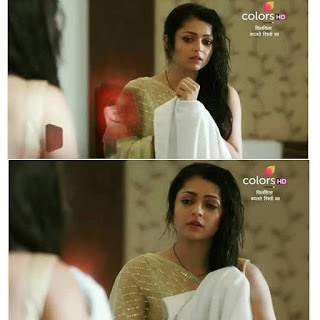 How are you feeling Rani ? He asked walking forward

Better. She murmured busy in drying her hairs.

We should visit doctor today.he was worried today seeing her condition.

No need.I am fine she mutter furiously wearing her bangles. And in that one bangle broke down piercing her soft skin with small pieces.

Ouch..aah..she wince with the effect and tears spilled out furiously from her eyes.

What the hell are you doing ? You always seem to angry. What had happened to you ? He shouted getting the first aid kit. 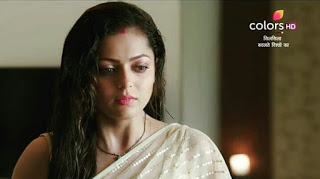 She mutter lost in her own turmoil while Samrat bandaged her wrist.

Leave it empty for today .he denied her for the bangles.

Don’t argue now. he took all bangles from her hand and put them on the dressing table again making her angry.

She turn away furiously.

For your regular check up.

It’s not about your mood swings.its for your baby. Samrat taunted seeing her tantrums.

Geet got up half heartily just hearing about her baby.

I am sorry. She patted her tummy asking sorry from him.

Ji hum nahi..Hume chod kar sabhi. even my b ..she was about to argue back when she bang hard on him yet again as Samrat walk further .