It’s been few days, Maan’s behavior didn’t change, the only sight of her made him furious, reminding him about her deed, and he would ended up hurting her by any ways he could find. he had as if owe to himself to make her life worse and miserable.

Geet made his breakfast ready, his fav. one. 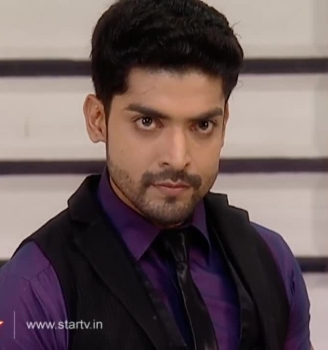 maan walked down and gives her one furious glare before taking his seat. Geet shivered and walked upto serve him his breakfast, like past few days, she shivered still just seeing his angry posture, he had already warned everyone to not to help her in any house work, completely throwing all responsibility on her.

his intense furious gaze was on her, making her condition worsen and she dropped down the bowl of pasta on him, all gasped in fear and waiting for consequences.

Geet was shivering like dry leaf, her whole filled with sweat. Maan was totally mad with rage now, he got up furiously throwing the chair behind, Geet jump back on her place, her eyes already filling up.

do you even know to do any work properly? he blasted marching towards her, she steps back in fear while he grabs her wrist furiously, jerking her closed, she yelped in pain. servants gapped at the scene keeping mum, but feeling bad for her.

yeah.. right. you don’t do anything intentionally. he mocked.. not even that diary…hunn?? he was twisting her wrist crazily, giving her immense pain, she wasn’t in her senses anymore to listen his blames as the pain started to engulf her, he broke her new set of bangles again in his rage, making her delicate wrist bleed yet again. .

Geet cried out feeling immense pain, and then seeing your own blood flowing out, it’s makes her dizzy..

aur muze jo dard hua hai uska kya?? ha?? he hissed leaving her , she was going to fall back, but in one swift move, he grabs her falling hand catching her thereby.. all gasped in horror seeing the sight.

his one glare was enough to make everyone run from there. all left leaving both husband and wife alone.

don’t do your drama.. he grasp her close, their noses touching, geet was going to lost her senses soon, with this continuous torture from past few days now, she tried to focus on him, she could see his eyes blazing with pain now behind his anger, just because of you I lost sam.. dammit.. do you know.. he shakes her hard, her heart twitched in great pain feeling his pain.. just for him.

I am sorry.. she mutter in low voice having no energy left.

I don’t need your fake sorry, geet.. keep that to yourself.. you will need it for your own self everyday.. because I will make your life worse than miserable.. he grasp her wrist pressing the cut on it, this is what you will get for messing with MSK. you dare to step into my life.. messing it.. now you will get it everyday for being Mrs. Maan Singh Khurana.

geet just listened to him silently, accepting herself the reason behind his all miseries.

next moment, he threw her on the floor, making her gasp, now listen to me carefully, clean the mess you have created fast.. don’t you dare to call any servant.. they are not for your service.

saying so he dash upstairs to change into another cloths, Geet managed to reach upstairs feeling dizzy.

she cleaned her wound and glance at her bandage hand, just today morning she has remove the old bandage and again new one replace her hand, she sighed preparing herself  mentally for the day ahead.

she wore the bangles in just one hand, for she couldn’t neglect them, bangles were her fav. ornaments.

come here.. and help me with this.. he orders from behind with rage.. she quickly got up and because of that felt dizzy. maan holds her again as she stumble in his arms, he gives her furious glare, she step back, sorry..

he jerked her back in his arms holding her waist, she looked down, his touched gives her tremendous pleasure, which he never knew. lost in his touch and arms, she started doing his tie,

unaware of his intense gaze which was on her face, she was beautiful.. more than any girl.. he had met.. even than sam.. and he was pulled out of his thoughts, realizing what he was thinking.. in rage, he started to press her delicate waist , so soft skin like a cotton.. his mind was playing again with her thoughts.. geet moaned in pain and pleasure, while his hands started to open her hooks at back, making her shudder, he pushed down her pallu from her shoulder making her turn tomato red.

she was so sensitive. just his one small act makes her redder, she turned hot with his next act as he remove her blouse , her wound pained in the process , but she could careless, what matters her to more than anything is maan.

Maan was totally lost in her ravishing beauty as she was wearing red sari today with those marriage ornaments, it’s makes her look even more gorgeous, he had been with many girls before but something in her started to attract him , in past few days.

he opened her bun, forgetting about everything at the moment, her silky hairs falls down on her bare shoulder making her look more sexier, he gaze at her flawless beauty passionately, his fingers entangles in her waist chain, he played with her soft skin there making her quiver in his arms.

geet lost herself in his arms, she has her eyes close, as he slams her back on the wall harshly making her moan in pain,

he removed her b**,, making her shudder, she was breathing heavily now giving him heavenly sight of her raising and falling ******. he was turn on, he pressed his body on her, both hooked up together on right places like a jigsaw puzzle.

geet moaned feeling hardness pressing down on her lower, he grinded himself on her, all the while keeping his gaze on her face, her red lips shivering , showing her small teeth, his hands went on her breast, kneading them harshly, she bite her lips to muffled the moan, he looked at her, couldn’t pulled away his gaze from her gorgeous face, her vulnerability makes her even more beautiful, do you know?? he said out lost in her charm, geet opened her dizzy eyes, looing at him confused,hhmm??

maan rubs his thumb on her soft lips wiping off her red lipstick, don’t put it on again.. I hate it.. he whisper huskily, before slamming his mouth on her, he kissed her harshly, nibbling and biting them, making it bleed. she hissed in his mouth feeling his fingers playing with her nipple, he pinch it hard making her scream in his mouth.

Maan would have ended making love with her, if not for his phone call, he left her suddenly, realizing what he was doing.. he was suppose to hurt her.. not to lost in her. damn he.. he cursed himself and took the his call, but hearing other side makes him more angry, he was late for his one of meeting just because of her, blasting the person on the phone, he turned towards her furiously, she was wearing her blouse with that shy smile on her face, that smile which he hated to see on her face, he wanted her to cry.. see that pain on her face, which he had bore just because of her.

He marched towards her and grabs her arm, jerking her around, she gasped, confused looked at him with her innocent hazels which again makes him lost in her, he stood clueless of what he was going to do with her, 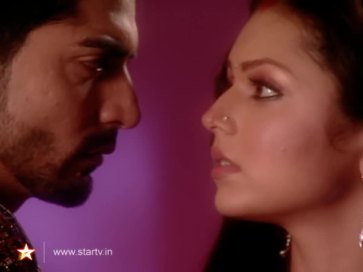 maan was pulled out his lost state hearing her voice, he jerk her back angrily, pushing her down on the bed, and storm out of room, not glancing back at once , as he heard her moan of pain before exiting the room.

geet had hit her head on the edge of bed with his harsh push, which he didn’t realized in his blindness of anger, she was losing her consciousness now, but her dizzy gaze stay on the door, from where he went out.

he didn’t even had his breakfast..

she murmured before blanking out.

maan was furious beyond wits, just because of that girl his day started on worse, became first time late in his life. he was back his self after attending few minutes. losing himself completely in work.

just then there was a knock on his cabin door, asking his attention, he looked up.. you ? what are you doing here??

geet woke up after few hours of sleep, she gasped seeing the time, and got up quickly with her busting head, she quickly dashed downstairs to see the floor clean up, nakul walked out of kitchen, and her eyes filled up, nakul bhaiyya. you don’t have to do this.. you know your maan sir na.. he will be so angry, once after knowing this.

ji ha.. koi nahi bolega kuch.. all servants said in unison making her cried out getting this little support after a while now.

but sir is not doing it right with mam. other servant spoke,

geet nodded in no, unhe pura haq hai, and it was my mistake. I spoiled his whole day. geet said innocently.

servants kept mum.. knowing their limits, they cant speak further against their boss.

geet walked inside to cook something for maan, and decided to visit his office with his lunch, as because of her he skip his breakfast also , she felt so sad, he must be working with empty stomach,, hey babaji.. hume maaf kar dena.. sirf humrai wajah se, unhe aaj bhooka office jana pada. she muttered .

when servants again inform her that they had already prepared the lunch,

ji nahi.. let me cook something for him, he  had already asked me, wana unhe achcha nahi lagega. she spoke pouting her lips,

he won’t know mam, please take this, and your time will also save, look, already it is lunch time now,

geet with thudding heart packed his lunch, reluctantly, fearing about his anger, but if she wasn’t sleeping this late hours then she would have time to make his lunch,

zalli.. she cursed her self , but having sweet smile on her lips for going to his office with his lunch not knowing about what awaiting her at office, which will wiped that smile also from her face.

Geet, her eyes wail up, heart was bleeding furiously seeing the scene before her naked eyes. she couldn’t held the intensity of pain and dropped down on her knees.