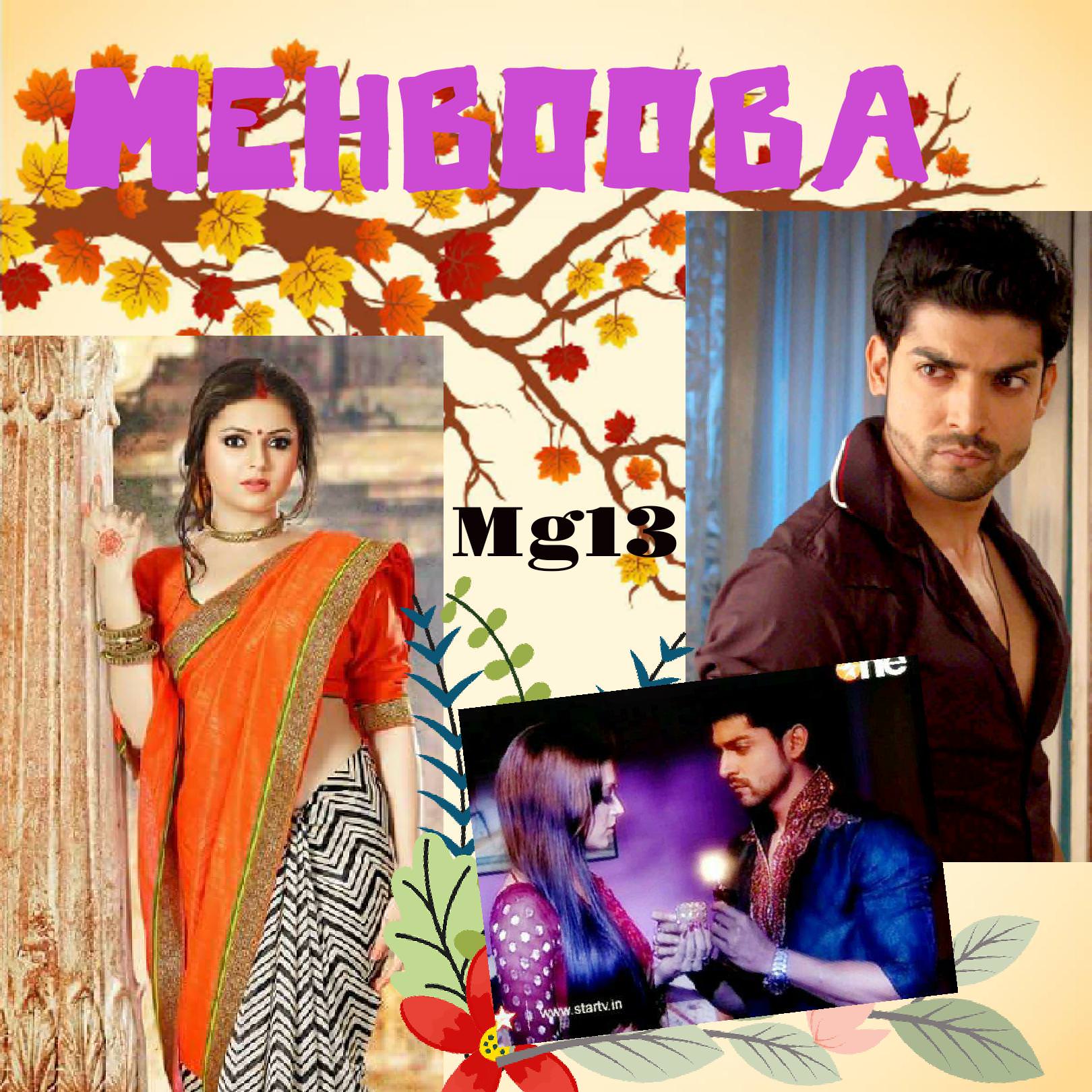 Geet was horrified with the thought of facing her husband in this condition. She felt earth could just swollen her inside so that she never had to face this in her life. She was so shock and numb couldn’t able to think anything to save herself or them from upcoming storm when in few seconds what happened,  she didn’t get .
Maan was shock as well but he make a quick move before samrat could entered inside he pushed her hard in the cupboard for her don’t want him to see her half bare that was just for him , only him.he thought ruefully .

His eyes blazing fire on the audacity of the Man.
Geet gasp as she just realized what happened but she heard his footsteps reaching towards them.  She quickly blabber out in hurry to stop him.
Yaha mat aaiye please. I am changing . Her voice quiver chocking with fear.
Samrat stop shock , he thought seeing the empty room she might be inside washroom but he curse himself for his damn manners now.
Hume maaf kar dijiye Rani , Hume sharminda hai ..
( do Forgive me , Queen.  I am ashamed )

He spoke each words with utmost respect for his wife but she take it wrong again.
As the door bang shut again geet broke down in river of tears ashamed of herself. She realized that she was holding on to him still rather almost all over him. She pushed him hard and ran out crushing herself on the bed.
Maan was shock and furious with her move rather her tears . He storm towards her and blasted on her.
You did nothing wrong . His statement left her flabbergasted that how did he know what is going on in her mind.
She looked at him with her teary eyes while he softly wipe it coming closed to her and take her lips lovingly in soothing kiss. 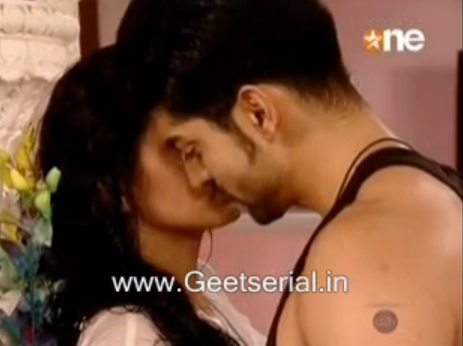 He kissed her ever so slowly trying to ease her .his hands started to play with her body , he was about to pulled out her towel when she broke the kiss furiously. He eyes blazing in anger .
Don’t come near me.don’t you dared to touch me again. She blasted , in her own guilt she made him her target.
GEET..he was shock beyond his wits. .from all other things He never expected her outburst.
MRS. RANAVAT..OR QUEEN FOR YOU. she don’t know from where the words comes from her mouth and how ?? Tears of frustration rolled down her hazels again.
And one look at his face she knew what she gad blurted in her anger. Her expressions changed to horrified and then painful one. She clasp her lips with her palm thinking what she just said him.
He was on fire. Bursting from inside like a volcano . And he barged towards her furiously pulling her in his arms.
What did you said ?? Come again? ? He whisper dangerously his eyes spitting fire on her , lips furiously crushing know her neck and he bite her hard almost turning it bluish red. He lick it furiously aging to sooth the bite.
AAHHH. .Mr.Khurana .leave me.you ate hurting me.
No I will not he hold her firmly. Remember geet you are only mine and no one have any right on you other than me. He clinch his teeth hard glaring at her face.
Her towel became loose when she struggle hard and tried to hold it tight . He pulled out it furiously and his all burn with desires seeing her all naked to his hungry eyes.
Geet gasp and cried out on him furiously banging on his chest.

I hate you.. KHURANA.. she shouted when he clasp her mouth with his palm.
Sweetheart..don’t shout.or you wanted to called your all maids inside and Watch me here with you in this state of yours..he whisper .he eyes glint in mischievous and hidden anger.
Leave. .me..she moan out in his palm feeling his hands molding her breasts furiously making her mad.
She was almost lost in his touch .his charisma.his but the incident taken place before stir her all insides and her stomach ached in fear and anxious. She fear to even think that what had happened if he had not moved fast hiding them self until the cupboard.
She started to wriggle hard in his arms when he turn front her nonstop tantrums. Already she had insulted him big time and hurt his ego.

Tum kya koi aasmaan se utari pari ho.
Kya samazti ho tum khud Ko.  I have all beautiful girls surrounded by my side who are ready to throw them self on me. They are even ready to sleep with me just with my one sign of approval. He whisper huskily. His voice was dangerous and his sinful words made her eyelids droop in shame of herself. Hearing him she started to feel low of herself.
He parted from her and threw the towel on her body angrily that landed on her tears trikes face.
Geet heard his footsteps and banging of the door and broke down again hiding herself in a sheet. 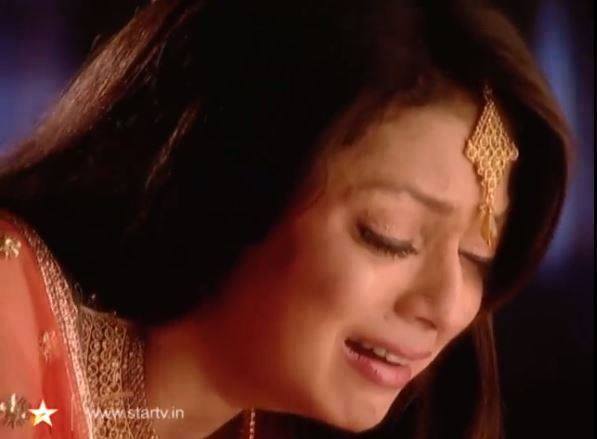 …
He rushed out to get away from her thoughts , her accusations , her warning but how much he tried to concentrate on his work he couldn’t success and ended up being frustrated on himself. It was not like MSK .it was Not . He shouted .
No one can changed him .not even that shit of geet. He fist his palm angrily banging it furiously on the wall .small amount of blood oozed out but he was lost in her words to recognize the wound.
MRS. RANAVAT..OR QUEEN FOR YOU.
Don’t come near me.don’t you dared to touch me again.
Damn. ..THAT WOMAN !!
…
It was dinner time and all have taken there seat respectively.  Geet and Maan sat face to face but no one dared to looked to other one.  Both were hurt by other one.
Geet was still lost in incidents that she was not ready to join all for dinner because she was knowing he will be there as well. She was hurt beyond repairs by his words. By him. By her self accusations on him  . But she had no other choice than this to stay him away from her or more precisely stay herself away from him.his charisma .his black magic which he was casting on her from the day one he entered inside her life. She wanted to drown in him leaving all inhibitions behind. She wanted to love him . Love by him .
LOVE. Maybe yes..her eyes glisten with un shed tears discovering endearing fact . She try to control herself in front of others
But yes she wanted to be love by him.her each cell buzzed with the need for him for his sinful and sexy touches.
Her whole shiver in her untamed cravings for him.
Her hazels travel to him who was gauging her each expressions.

He was totally unaware of the storm going  inside her.  But her tears made him furious again as her accusations play in his ears again and again making him go mad.
She drank whole glass of water to gulp down the knots inside her throat. She was feeling it hard to control herself in front other others. She wanted to run towards he room and broke down all alone inside 4 walls of hers who were the one accompanying her from the beginning in this big palace. 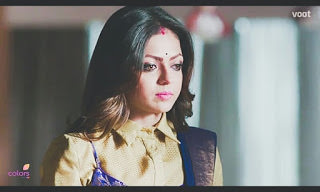 She was bounded .bounded in a caged of relation .cage of marriage that she was now suffocated in it.
…
PRECAP : KARVACHAUTH ??