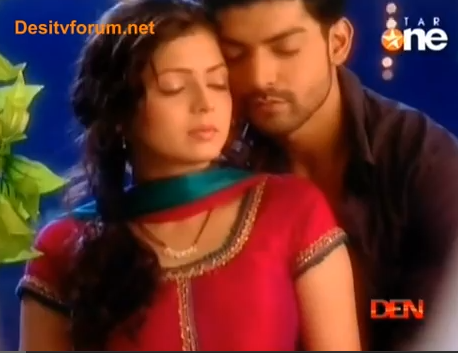 Both were lost in each others arms feeling solace . Geet buried herself more into him feeling cold and warmth of his love which was cocooning her. She sigh in his crook of neck making him groan with her breath falling on his bare skin.

His hands still wandering on her bare waist and he pinch her softly making her moan in pleasure.

Maan..she looked at his naughty eyes and shy away lowering her head. Soon her breath hitch in her throat feeling his fingers going inside her blouse.

.whereas maan continue to smirk at her each expressions naughtily.

There hidden romance broke with the talking of some guys in the group which make them turn there attention towards them as they heard the guys were talking about the Queen of Jodhpur.

Have you seen her ? One guy asked to others.

Not yet but desperate to see her once .other replied with the need in his eyes.

Yeah yaar.I wanted see that Royal Beauty once which is hidden in that palace.

Just wait for few days..we will soon ! As for that reason only we have landed here, haven’t we ? He asked other smirking and there talk on Geet aka Rani GEETANJALI continue.

Here maan was burning in rage hearing them , he can very well understand where there talks heading to. His hold tighten on her waist .

Geet was terrified hearing them , her eyes fill up with tears of anguish , rage and hatred for all men species. They are so desperate to see her beauty that they forgot , she is also a human being , not some show piece or doll to satisfied there hungry eyes.

Her thoughts break with his tighten hold,  but she didn’t felt any pain rather than the pain in her burning heart.  For a moment she flinch from his touch connecting him too with others.

But one look at his face she knows he too was angry on them .her heart and mind turn confuse what too believe and what not ?

She unwrap the blanket and get out if his hold standing on her place suddenly. Maan turn to look at her , she was very much disturb with there talks and in her own miseries .he knew she did not like it nor she wanted to heard it .he cliche his fist there all day ruin with just this little minutes.

Before he utter any word she flew from there with tears rolling down her cheeks.

Geet …Geet he called her from behind but she didn’t stop ran in the direction of unknown.

Shit..he ran after her fearing for her safety. It was all dark in forest area.

Geet stop after few minutes finding big tree and she broke down completely holding onto tree. She remember her marriage with Samrat again and whole world comes crashing down on her as she realized that she is doing so wrong here coming with Maan when she is married.

For God sake you are married Geet..she scolded herself hitting her head on the tree trunk. She heard meek voice of maan calling her but lost in her own world of pain she didn’t acknowledge it.

She was in her own agony when , she heard some footsteps .she turn back thinking it to be maan but she stop shock not finding Him there and her hazel eyes turn horrified seeing some goon type men approaching her .

Maan was contentiously calling her going away from camp that no one was there . He fear not finding her anywhere. He look everywhere around in the dark but anything was not visible in the dark night in forest area. He finally switch on his battery on phone and continue his search on his sweetheart worried sick for her safety.

Soon enough he heard some cham cham sound and he knew that she was here only around him but why can’t she responding to him. And he got his answers as he heard some muffling sound .he get to know that she is in some danger. His eyes turn red in anger to think on that and he take slow steps not daring to angle his battery on that side fearing whoever was holding her might hurt her.

Geet was filled with dreadful sweat beads , as she wiped her tears and wet face with her duppatta wrapping it around securely .she didn’t wanted to show her weakness to them to gave them more strength to feast on her. Her eyes blaze red in anger and fear .she knew now she is in great danger .she curse herself for coming here alone .her heart called only for her Maan.

Geet try to go away from that place but one of the goon held her wrist tight not letting her move.

Geet flinched with his touch.she felt cripples running down on her whole body.

Leave me. She order latterly making them all angry that all surrounded her groaning in anger.

She shiver with there advance trying to wriggle out of his hold.

Itni bhi kya jaldi hai ? The goon who was holding her taunted jerking her closer and other one from back pulled out her duppatta and threw that aside scaring the hell out of her .

Geet gasp hiding herself from there dirty eyes as one line tear riled down on her beautiful cheek.

You don’t know who am I?  She tried again grating her teeth’s in disgust .she loathed them .all are same just as the group of boys talking back there.

Ha ha.. we don’t want to  know either babe ..all laugh loudly making fun if her vulnerable condition .

Aahh. .don’t. .she hissed back with one touch of the man on her arms .

Hey you are behaving as if some Queen.the man jerk her closer holding her shoulders tightly that her sleeves torn out making her furious that she push him away angrily.

Yes I am Queen..you sc*****.  She scream getting fed up now and started to run from there when other man hold her tightly and the man she had push slap her hard across her cheek making her bleed.

Aahh. She scream slightly.  Touching her torn lips and cry out finally on her condition.

Queen are not meant to be here outside roaming alone in the night . The man gritted not believing her words as he hold her face in his hands ready to kiss her but she hit him hard on his main point getting her senses back from his words and started to run again .

When she was caged in his arms again but she saw her ray of hope as she saw his back finding only to her . She smile in there hold trying wriggle out finally her maan come for her rescue , she thought with her wet eyes . She can recognized him in the darkness also.

She was about to scream when the man hold her mouth tight .she started to wriggle in there hold and her Payal and bangles made a sound that reach his sharp ears.he can able to heard her soft muffle also. His fist tighten to think that someone was holding her forcefully.his sweetheart.  He try to focus his torch to other side so that to make them believe he had not seem them .from his corner of eyes he can able to Watch there every move in dim light.he saw her wriggling in there dirty clutches and they heartless monsters are holding her mouth even. His fist clinch , jaw tighten to witness this.

Geet saw him going away from her , her eyes well up turning horrified , she try her all will power and remaining strength to wriggle out of there clutches. And finally she bite onto his hand which was on her mouth almost bringing blood on his fingers .

And his all patience broke hearing her scream .he turn furiously to see her landed on the ground as that mam just push her.

Aahh she cry out making his control all loose up and he ran towards them .

Maan..she shouted feeling overwhelmed as she stood on her place and ran into his arms finding herself safe there.

he murmurs engulfing her fragile body in his arms.