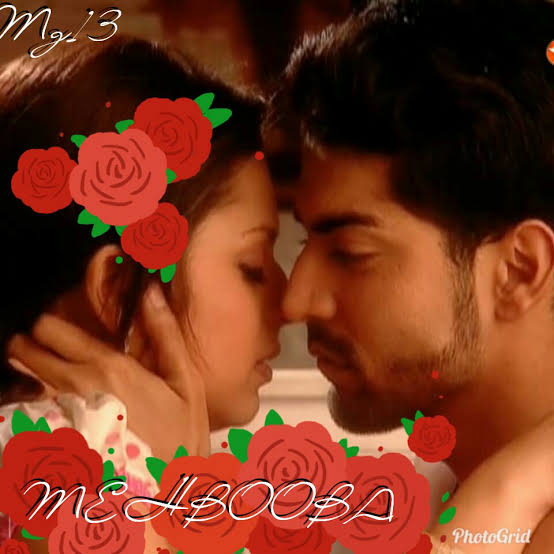 Geet was hell scared with his changed of demeanor today. She was frustrated on him but more than that she was angry on herself .how could she flow in his passion , without thinking of her marriage. Being a married women it pinch her hard for a moments they both share but along with that she felt peace & pleasure running down her nerves just thinking on that.
It is all wrong ..her mind said out loud as her tears rolled down continuously.
No it felt all right .her heart scream out as more tears rolled down slipping inside bed sheet.
Thinking all this she didn’t get when her eyelids droop being so tired emotionally & physically. Her head felt heavy and she went into dip slumber.
…

He entered inside her room at midnight and saw that she was in same position as it he left her .he slept beside her in the blanket and take her in his arms only to realize her body was burning with high fever. As her nipples poke on his half opened chest he groan in his untamed desires.
He looked at her sleeping face and felt more frustrated on himself , because of him she is now in this condition. He kiss her dried tears ever so lovingly that she moan in her sleep hugging him back. He smile softly before cocooning her in his arms and soon he drifted into sleep having her close to him.
Morning sun rays waking her up from her peaceful sleep ever. She try to stretch her body but felt stiff as I’d caged inbetween some strong thing.she slowly opened her hazels only to be shock to find him there beside her hugging her.
How come he landed here beside her ? She murmur so confused. And started to wriggle in his arms to stand up but he didn’t let her already awaken with her movements. He tighten his hold on her bare waist making her startle as she come to know that he was also awaken. She looked at his face with his eyes closed he was smirking slowly.
She turn more angry and tried more hard to wriggle out of his clutch but in his hard grip it became impossible. Finally being tired she fall on his chest closing her eyes.her action made him amuse as he look at her tire face lovingly and caressed her soft cheeks pushing behind her curls.
I am sorry sweetheart. .his words come as soft wind touching her earlobes she opened her eyes slowly stare into his with her soft expression so was his.
But she turn her face swiftly before getting up from him . Geet , her eyes widen in shock feeling herself all bare from her torso.how could she just forget to wear something, she curse herself trying hide herself crossing her hands on her front feeling her eyes stinging with unshed tears .he looked at her trying to hide herself from him .it didn’t went well with him but seeing her so vulnerable also he don’t like .he simply wrap her with bedsheet and she ran in washroom directly without facing him back.he looked sad at the door of washroom and rushed from there angrily.

It turn another night but she was not ready to face him nor ready to talk with him. He turn more & more frustrated seeing her behavior. It hit his male ego but more than that he can’t even just bear her this torture. It was just dining together with Rajmata but she was more silent and looking gloomy than any other days. She didn’t even glance at his way that made him more angry.
Geet was so upset whole day without him being on her side. But she can’t even go close to him , being her married women that come as a obstacle in her ways. She was angry on him , on herself for getting flow like this in his passion. But as his sad and frustrated face come to her mind , her heart twitch thinking about him.she is missing him terribly. He was always there with her beside her , her only friend in her this cage . Who had shower her with utmost care and love .LOVE ? she didn’t think of that word from other side when she didn’t get that from anyone in her life time ..she had given her own craving to get one ounce atleast but she didn’t. .tears rolled down on her cheeks remembering his beautiful face always adorn with his devilish smirk .she smile in between her tears and ran towards his room not wanting to loose only person in her life who was more precious than any other things at this time of moment.

He looked at the screen and pour himself a drink that can only make him calm and he his moment. His frustration , his anger , his untamed desires that were no where to stop feeling her soft beauty..as he close his eyes her sad face come into his eyesight and he drank one glass furiously with his eyes red with passion and hidden feelings for his women .. his sweetheart. He smirk yet again thinking that she will be his soon no matter what.no matter she is married or single , he will snatch her from The king and he throw that glass furiously. ..

Geet gasp in horror as the glass landed on her feet breaking into small pieces that she wince back with moisten eyes feeling scare.
Oh shit. .he with a fast steps move towards her and she stop dead being so scared with his demeanor .
Sweetheart, don’t move stand still ..ok..he warned her worried that may glass pieces harm her soft skin.
Geet nodded silently trying to control herself heartbeats that were really fast.

And he take her in his arms suddenly reaching near her so that she can be saved from the mess.
Geet looked into his worried eyes and cup his face lovingly. Maan stared back at her , his expressions which were sometimes before rigid & tense .but now it was all soft having her on his arms.

She hug him lovingly keeping her head on his chest finally finding that peace having him closed to her.whole day she was restless without him.

Maan made her sat on his lap seating himself on the bed.geet shied away with his gesture but soon she felt his breath of her lips and she turn her face instantly .
Aapne sharab kuyn pee? She asked sad at the thought as his alcohol smell fill in her nose.

Tum jo nahi thi mere pass. .he replied honestly before taking her lips in his own .