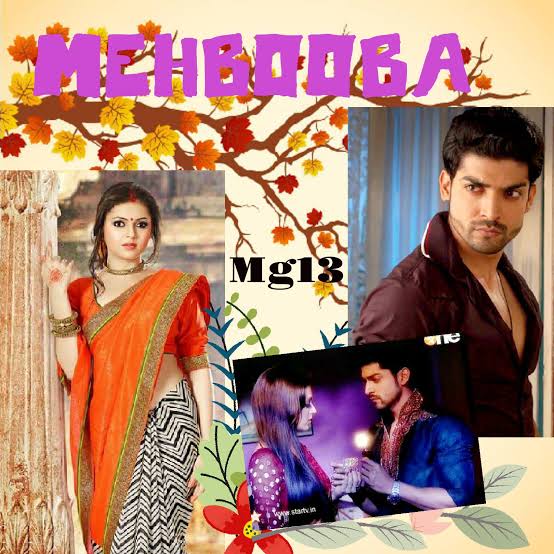 He was about to see her beauty but that’s when he heard the knock on the door.for a moment he was blank but second knock broke his reverie. he come out of his daylight dream with a shock on himself.
As Geet just step inside the room unsure when she didn’t get the response from inside , he angrily bang on the wall being frustrated on himself .
she startle regretting the moment she thought to enter his den.and as she started to take her steps back but soon felt him pulling her inside harshly and she heard the door get lock behind her.

He pin her harshly to himself glaring her raw beauty that seems to untouched. He just now realized as his fingers graze her soft cheeks earning a little groan from her throat.

Geet got lost in his charm as his wet look drive her crazy along with his after bath smell.

Before he could take the next step she buried her face in his wet neck .it’s trigger her all inner self. She can’t able to control anymore. This is what she desire from very long time.her forbidden desires which didn’t get fulfill by her own husband. Suddenly reality struck her hard making her feel low of own self.

She so wanted to pull back but her body refuse to as his rough hands roam all over her bare back feeling her softness making her week .few tears rolled down from her hazels ..and again few and her eyes flow like a river on his shoulder.

Geet .he was shock feeling her hot tears.he parted her slowly whereas she try to wiped her tears bending her head down.

Sweetheart ..what happened ? The words left his mouth making both of them shock. But maan he was always straight forward. Can never hide his emotions from her.

She looked at his with her hazels widen still sobbing hard but she try to wiped it hurriedly.

Don’t. He hold her hands while she looked at him confused with tears still flowing down.

Don’t. Let them flow freely..you will feel light.he advice against his dream where he scolded her not to cry .

But that was because he can’t see her tears but again it is her health what matter to him most.

She hung on him again tightly and as a effect both landed on his bed on his back while geet on him.

Her shivering lips touch his rough own and fire ignite in both of there bodies .he press her flesh of waist tightly whereas her soft palm clutch on his bare shoulders.

She just place her head on his chest where his heart was beating rhythmically being in her close proximity.

Maan was so amuse and awe with her sweet gesture. He engulfs her tightly in his arms feeling peace in his own self.

Geet don’t know what happened to her suddenly she felt the need of him. To hold him close to her.he is for her.

They remain like that for a long hours when there eyelids droop and get to sleep both didn’t get .

It was when one of servant knock on the door few times to  called him for lunch. It was message by Rajmata herself. Geet was shock with the knocking, she hurriedly try to got up but fall onto him making him groan in desires.

Sweetheart aaram se..he said out helping her to stand .geet was all red by the time .she didn’t object him calling her that.in fact she felt too good with that new words from him.she felt goosebumps all over her body hearing that from his mouth.

Geet stand beside silently fidgeting with her pallu while maan opened the door little bit so that geet can be hided.

He nodded curtly and bang the door shut.he looked at her nervous face and thought it is because of there close moments. He smirk as he pulled her again to him.

Hume chodiye ..woh Rajmata wapas aagayi hai. She said absent mindly. He can see her eyes sad and he didn’t like that.

Geet.she come out of her lost state and stare at him again .

You go .I will come after changing. He said leaving her.she just nodded silently not liking the idea of going away from him even for a minute .

You will be there , hain na ? He was startle with her sweet question. He turn to looked back at her .she looks so vulnerable. Her lips were quivering , he really wanted to take them in his own and pacifies her but it was not the right time then can have there own time in night all alone.away from this world.

Yes SWEETHEART .I will be there with you.always .he added reassuringly blinking his soft eyes and her face brighten up with big smile hearing him .she just rushed towards him and kiss on his beard cheek loudly making the sound and ran out chirpily like a small child who got some forbidden treasure.

Maan was too shock with her each gesture today but he smile big seeing her happiness and running like small child.

She went from the other side of palace not to make Rajmata conscious. As she was seated on her seat she was welcome by  dead silent on the table which she hate the most but can’t do anything.

Soon her Mr.Khurana join the table making her surrounding lighted. She remain unmoved in front of Rajmata .

So how is the work going on , Mr.Khurana.? He heard the old lady asked in Royal manner.

It’s good.in half way .I think.he reply in his own attitude.

Hmm..it is fast.she was impressed with speed he was doing it.

Geet on the other hand was admiring him thoroughly unknown to Rajmata as she was busy in her conversation with Maan.

He enjoyed her drooling on him.he was talking with Rajmata but has his eyed on his sweetheart.

He smile catching her own of glance making her blush thereby.

There were busy in eating when all of a sudden she felt his gaze crawling on her bare waist under the table.

She gasp stopping her eating as she first look at Rajmata who was busy in her own plate then move her scare gaze towards him.

He was smirking eating his own meal enjoying her softness .all servants was in front while no one was there behind there back .

Geet slowly started to eating with grate difficulty as it was not possible for her to told him or gesture him anything in the presence of Rajmata.

Maan hungrily enjoying her softness along with eating his meal.he just wanted to take her there and then only .he groan seeing her state.she was trying to stop herself from moaning out loud while her face was warm and he pinch her bellybutton making her left her spoon suddenly and that make a sound earning Rajmata’s attention.

She glared at her not saying anything in front of Maan. Geet fumble as she downcast her head seeing her glare.

Maan instantly leave her seeing that devil women glaring at his sweetheart. He wanted to killed her at that moment. How dare she.

Geet cough suddenly gulping her tears and he got at once concern for her as he offered her glass of water .

Here take this Queen. He wanted to rubbed her back but stop his urge to doing so infront of Rajmata.

Geet burn in anger silently so is maan.

As the lunch got over.Rajmata seems in hurry left the table excusing herself leaving both of them alone.

Are you ok ? He asked concern holding her hand under the table as there was still servants were left.

Aap ja sakte hai..geet order them so that both can be left alone.

Rani..he called her seeing resting on her back on the chair with her eyes close.

Ji.hum bilkul thik hai . Aap pareshan mat hoeye. She said softly staring at his face.wave of peace rush through her seeing his concern for her.

Aachcha. .he pulled her suddenly taking her on his lap.

Maan. And he heard her calling him by his name.its felt too good more than his dream in real.

She stared at him with her big amber pool while he lock his chocolate brown eyes with her getting drown in her.

Say it again..he huskily asked her cupping her one cheek sliding her hairs behind her ear.her earrings dazzle in her ears making her look more pretty.

Kya a. .she stammer in the effect of him.

My name ..sweetheart .first name.he repeated getting desperate to heard his name from her sweet lips.as he pulled her harshly almost leaving no space between them for air also.

Oh sorry.humne galati se ..she murmur on his lips as they were touching each others.

His gaze was fixed on her moving lips as they moved over his rough own.

Say it again sweetheart he huskily asked her to repeat it.

Maan..Maan..maan..she called repeatedly to his heart content while he felt bliss by hearing her calling his name.

In the moment he take her lips to kiss her hard but before he could she pulled herself away and in a fast move stand from his seat and ran towards her room giggling on her own act.

Maan got lost in the angel who was playing with him.he smile seeing her so happy today.he didn’t get first what and how happened all suddenly. First he did groan in frustration by her act but it was good though as they were romancing here in open. It was not safe for them.

Thinking all this he ran behind Her to give her surprise to make her more happy .